Incentive Alignment: The Importance of “Skin in the Game”

Depending on the type of real estate investment opportunities you choose, you may be entrusting your money to a third party manager. Real estate syndications and REITs all involve you putting money into a pool that is deployed by a reputable investment manager who will determine the best way to use that capital to generate a return for all of their investors. While entrusting your hard-earned money to a stranger can be worrisome, there are certain qualities that should alleviate these concerns.

While a proven track record is essential, it’s also important to consider how much “skin in the game” the principals have in the entity they are managing.

Established investors often live by the mantra that, “no one will take better care of your money than yourself.” After all, you’re the person who has worked for that money, so it stands to reason that you are going to be the most protective of its long-term and short-term stability.

This fact also points to the importance that the investment manager has an adequate amount of skin in the game to serve as a motivator for them to work harder to sustain the health of the investment.

Let’s assume that you’re investing in a real estate syndication that has chosen a property that costs $3 million. The pool of investors has compiled somewhere around $2 million, leaving the need for another $1 million to complete the deal. The syndicator or sponsor may put the remaining $1 million into the fund in order to close the deal. Doing so ensures that they have an adequate amount of skin in the game. This investment from the sponsor also serves to let the investors know that the syndicator believes in the investment and will work tirelessly to better protect it and generate a positive return. Why else would the investment manager risk their $1 million? 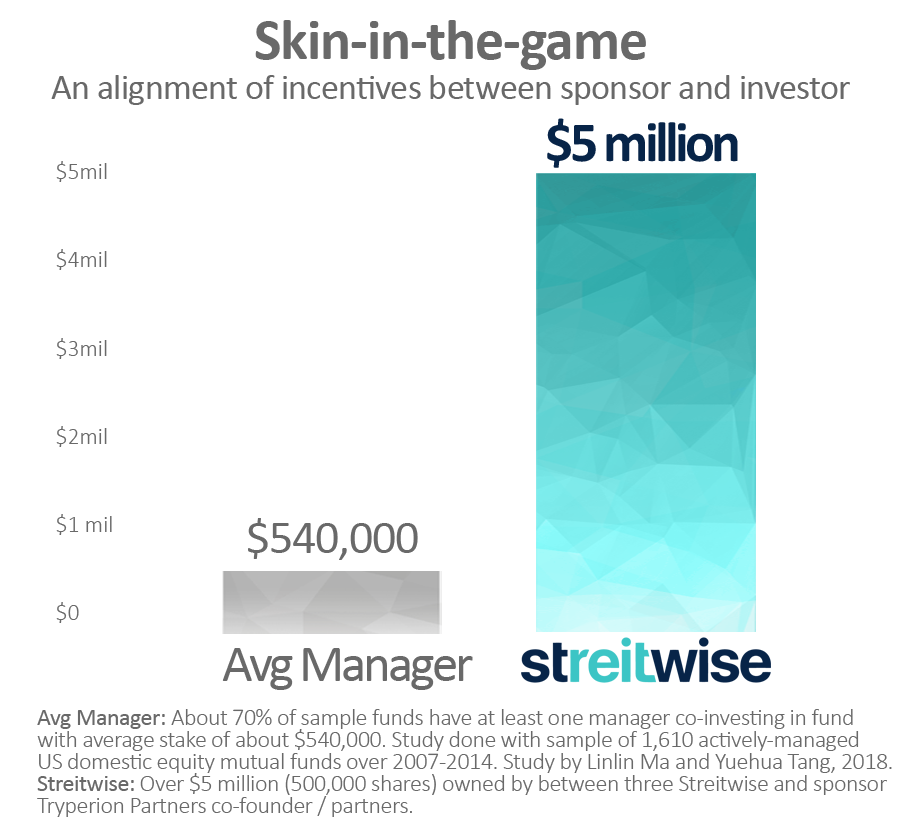 You may assume that virtually every investment manager is willing to put money into their own investment, but that’s simply not the case. According to a paper by Professor Ma Linlin of Peking University HSBC Business School and Associate Professor Tang Yuehua of the University of Florida, it is incredibly important for investment managers to have skin-in-the-game in any investment they manage. Just how much?

Tang and Ma vetted the majority owners of 1,610 active US domestic equity mutual funds that were in operation between 2007 and 2014. Based on their research, 70% of sampled investment managers (1,127) had invested in the funds that they managed. Additional information showed that these invested managers put around $540,000 into their investments on average.

In a study done of hedge funds, hedge fund managers with high skin-in-the-game yield better results than their counterparts on a risk-adjusted basis.

“Greater insider investment better aligns incentives between managers and investors and induces managers to limit the size of their fund, resulting in higher alphas,” according to the study.

“In the end, knowing that the manager has skin in the game isn’t the sole reason to choose a fund, but it makes sense as a basic criterion or a tiebreaker for selecting between two funds.”

As an investor, it’s a good idea to find investment managers who are willing to “put their money where their mouth is.” Doing so ensures that they are just as motivated as you to protect the investment and generate positive returns.

Adam Luehrs is a writer during the day and a voracious reader at night. He focuses mostly on finance writing and has a passion for real estate, credit card deals, and investing.