The Case for Investing in Targeted Secondary Markets

A quick thought exercise we used to do: Why did office buildings in markets such as Indianapolis, Columbus or St. Louis trade at higher cap rates than New York City, Los Angeles or San Francisco? Raise your hands if your first instinct was because they carried more “risk.”

That’s the first and simplest answer that most people provide. Those major markets are preeminent technology, media and financial hubs with global investment demand. Liquidity is almost always available and if you lose a tenant, it was widely presumed that another one exists behind them. Not to mention, rents had a history of occasionally going vertical.

But take that thinking to the next level… All those assumptions were already built into the price.

The low cap rate takes that margin of safety out of deals. The mere fact that you can acquire properties in non-coastal markets at higher yields fundamentally means that you have more cushion to withstand a negative market environment.

In the pre-covid market environment, everyone looked like a genius when underwriting mistakes and margins of safety were papered over by consistent growth.

Let’s hit the data. Below is a sampling of historical rent growth and occupancy in San Francisco and Indianapolis, courtesy of Cushman and Wakefield research. 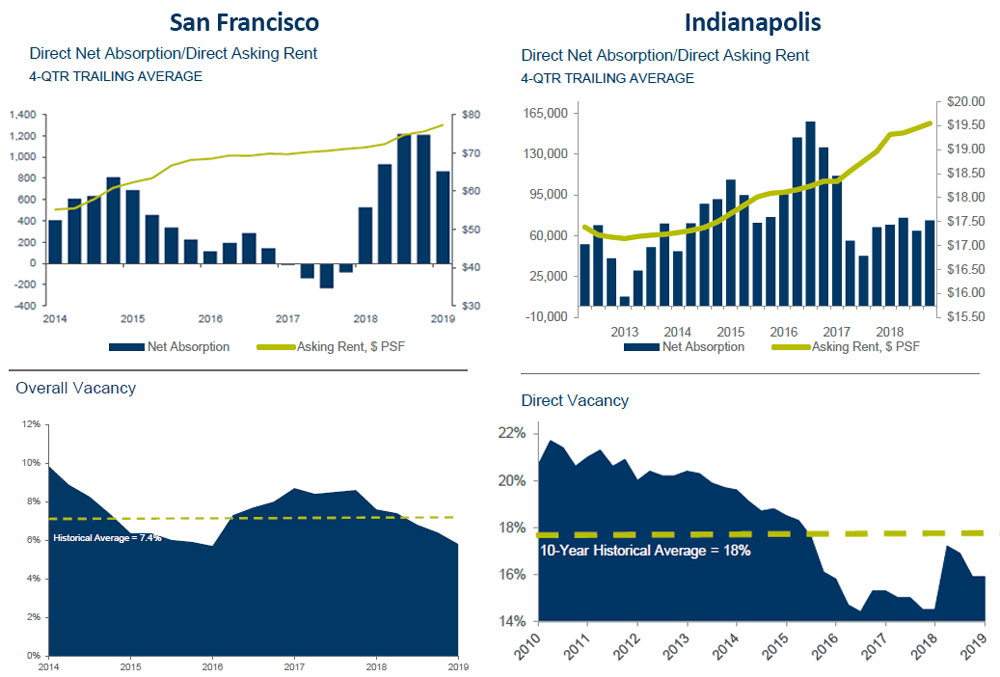 What jumps out? The most obvious is that San Francisco saw percentage rent growth outpace Indianapolis. But you knew that before looking! Without that rent growth, one can’t turn a 5% cap rate into a 15% total return, it’s simply not possible.

You know what else? San Francisco rents in 2019 were just slightly beyond their all-time peak. Which means? When rents came down, they came down a lot. Contrary to popular belief, stability is not a hallmark of primary markets. When things are going well, they can go very, very well. But when the economy softens, look out.

Note: This was written before the Covid-19 pandemic, having made suburban and secondary markets particularly stand out from a lifestyle perspective).

Take another example with Manhattan’s office market. Manhattan is actually above average in occupancy and yet rates have basically flattened out the last few years.

Meanwhile, while St. Louis is below average in occupancy, rents are also very stable.

Imagine that as an investor in targeted secondary markets: Stable rents, and higher initial yields. When someone asks why we look where we do, it’s because investing isn’t just about catching the next big wave, it’s about avoiding the rocks when the wave eventually breaks onto shore. And with what we’re seeing unfold before eyes, we think the secondary market and suburban-urban (also called “middle neighborhoods” or “surban”) thesis has some additional wind in its sails.

Mr. Karsh is CEO and Co-Founder of Streitwise and Tryperion Holdings.